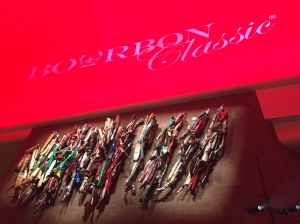 Despite the snow and record low temperatures, Mother Nature couldn’t keep hundreds of Bourbon fans and aficionados from attending the 3rd Annual Bourbon Classic. Co-produced by The Bourbon Review and FSA Management Group, the two-day event, held Feb 20-21, included numerous tastings and seminars for the bourbon obsessed. As the heart of bourbon country (apologies to Bardstown), Louisville serves as the perfect host city for this growing event.

To get our 2015 experience going we attended the Classic kickoff media event on Wednesday evening at the BBC Bourbon Barrel Loft in downtown Louisville. The event was sponsored by Four Roses and included a great sampling of Four Roses bourbons and cocktails. The highlight of the evening included a vertical tasting of 2012 – 2014 Small Batch Limited Edition bourbons. This was a highlight for me as the 2012 is one of my favorite bourbons of the past few years and the 2013 125th Anniversary bottle is no slouch. 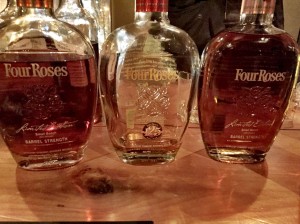 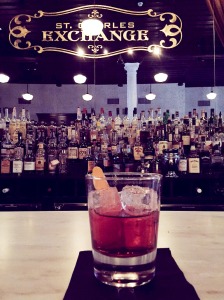 One of the perks of the Classic being hosted at The Kentucky Center for the Arts is that it is within a short walk of my favorite happy hour spot, St. Charles Exchange. So the fact that a group a group of friends and I meet there every Friday, it was the perfect spot for a pre-Classic cocktail. Since I knew the weekend would be full of bourbon, I went with a classic Negroni. Now I was ready for some bourbon!

The first night of the Classic focused on cocktails and food in the Bourbon Classic Cocktail Challenge. This two-part food and cocktail pairing competition brought together nine teams of some of the region’s best chefs, mixologists, and of course, bourbon. The first half of the evening challenged teams to create a pairing of classic cocktails and small plates. The second half of the evening called for teams to create contemporary bourbon cocktails along with small plates. I must say the bartenders and chefs really stepped up for the event. Although only a select few were named winners (listed below), all participants turned out some outstanding food and drinks. After countless cocktail and food samples the evening came to a close and I looked forward to the next day of events. 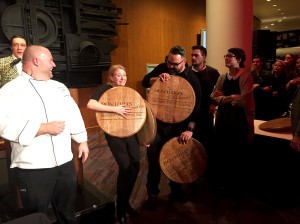 Saturday’s round of events was aptly labeled as The Ultimate Bourbon Experience. The day consisted of the Bourbon Masters General Session and two tracks of educational sessions in the Bourbon Classic University. The Bourbon Masters session was a lively, spirited discussion lead by the always entertaining and insightful Fred Minnick, bourbon writer and photographer extraordinaire.  The panel consisted of a distillers Who’s Who. Chances are good that if you own a bottle of bourbon, it was distilled under the eye of one of these talented folks.

Of the eleven distilleries represented on the panel, only two were from outside Kentucky: Nicole Austin, Master Blender, Kings County Distillery (Brooklyn, NY); and, Chip Tate, Tate & Co. Distillery (Waco, TX). As a native Texan, a longtime (a few years) fan of Balcones and the great products created by Tate, I was extremely interested in hearing his take on his recent, highly publicized departure with the distillery and brand he founded. Although the split was not exactly amicable, Tate is definitely ready to move on to his next distilling venture and as whiskey fans, we’re all cheering for him.

With a 10:1 ratio of men to women on the panel and as an author on the importance of women in the history of whiskey, Minnick felt compelled to ask Austin on her thoughts on being a female in a traditionally male dominated role. Austin was quick to prove her disdain for the question that she’s obviously received many times before. It was a lighthearted moment and response but the message was clear: there really shouldn’t be a distinction between the two. Point taken.

“When I retire,” was Jim Rutledge’s answer when asked of the chances that Four Roses would develop a flavored whiskey. Wes Henderson noted that only bad whiskey like Canadian and scotch should be used when making flavored whiskey. On the demand and popularity of rye whiskey, Jimmy Russell turned to the audience and asked how many folks like rye. As a majority of the hands went up, Russell asked why no one told him this years ago. When asked what was the best bourbon he ever made, Jim Rutledge commented . As an avid bourbon collector and drinker, I’m going to keep Jim’s comment contained to those of us who were in the audience. I want to be sure I can track down another bottle (or two) without the price being driven up! Overall, this was a fun, entertaining, and educational session with some of the industry’s living legends and future stars.

As part of the Bourbon Classic University, I decided to attend the Bourbon Collections session. The session focused on the ins and outs of bourbon collecting. Renowned bourbon historian, Michael Veach, provided great insight on how to date bottles when the distillation and bottle dates are unknown. Larry Rice, owner of The Silver Dollar and El Camino; and Matt Landan, owner of Haymarket Whiskey Bar, discussed the various ways folks who are interested in bourbon collecting can get started. For those who are already into collecting or are curious on a bottle’s secondary market value, Justin Sloan introduced his website, Bottle Blue Book, where values are tracked in real time.

As a grand finale to the Classic, an ultimate tasting event provided attendees with samplings from participating distilleries. Popular tastings included Heaven Hill’s 2014 Parker’s Heritage Wheat Whiskey, Weller 12 in the Buffalo Trace VIP area, and King County’s whiskey offerings. The tasting was a perfect send off for 2015 Classic. Once again, Louisville was the epicenter of the bourbon universe and all was good. Great job and congratulations to all involved in putting together this great event.